Encounter of Petrarch and Guy de Chauliac outside the castle of the Popes in Avignon. Francesco Petrarca (July 20, 1304 - July 19, 1374), commonly anglicized as Petrarch, was an Italian scholar and poet in Renaissance Italy, and one of the earliest humanists. He is often called the "Father of Humanism". His sonnets were admired and imitated throughout Europe during the Renaissance and became a model for lyrical poetry. He traveled widely in Europe and served as an ambassador and has been called "the first tourist" because he traveled just for pleasure. Guy de Chauliac (1300 - July 25, 1368), was a French physician and surgeon. In 1342 he was invited to the Papal Court in Avignon, France, to serve as a personal physician to Pope Clement VI. While serving at Avignon, Guy made the acquaintance of Petrarch. Chauliac's seminal work on surgery, Chirurgia magna, was finished in 1363. La ciencia y sus hombres : vidas de los sabios ilustres desde la antigüedad hasta el siglo XIX T. 1 [Science and it's people Vol 1] by Luis Figuier ; traducción de la tercera edición francesa por Pelegrin Casabó y Pagés ; ilustrada por Armet, Gomez, Martí y Alsina, Planella, Puiggarí, Serra, Printed in Barcelona in 1879 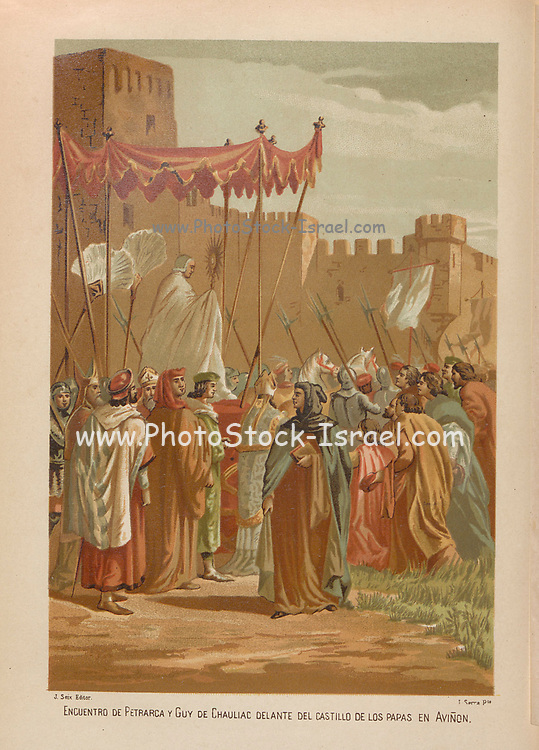